The installation of IQinVision megapixel cameras at a jewelry store in Pennsylvania by Access Security Corp., an integrator based in Warminster, PA, was more successful. In a recent incident, a man allegedly stole a $47,000 engagement ring from the jewelry store. The man, who spent more than two hours in the store, was able to palm an engagement ring while the salesperson was busy putting away multiple rings he had already viewed.

A few months prior to the incident, Access Security had upgraded the jewelry storeâ€™s standard resolution camera system with IQeye megapixel cameras and an Exacq Technologies DVR.

The upgraded surveillance system caught the entire crime on video. That evening, Access Security was called to help retrieve the video. After positively identifying the man stealing the ring, Access Security exported the video to a CD for the police department and created a still photo for the local newspapers. After the picture appeared in the local papers, it took only two days for the police to apprehend the suspect. The owner of the jewelry store was impressed. “With our old CCTV system, we would not have been able to catch this guy and our ring would be gone,” the store owner said.

The chief deputy district attorney was quoted saying the video was “critical” to the arrest.

The customer enthusiastically shared the video clip with IQeye and us, and the pictures tell the whole story.  The image detail and clarity from the IQeye 703 megapixel camera is simply astonishing.  The video clip of the incident was exported from the exacqVision NVR system.  The exacqVision player allows anyone to then view the exported video, step frame by frame forward and backward, digitally zoom and pan around the video, save off specific images as JPEG files, save off clip segments as AVI files, and so forth.

Here is a scaled-down image of the full camera view (click to view the full original 2048×1536 image): Using the exacqVision Player, we used the digital zoom to look at six successive frames where the actual theft occurs. In this first frame the alleged thief is looking at the ring; the clerk is distracted throughout. In the next frame he is getting ready to palm the ring in his left hand. The next frame shows the ring actually being palmed in his left hand: The next frame shows him getting ready to grab another ring to look at: 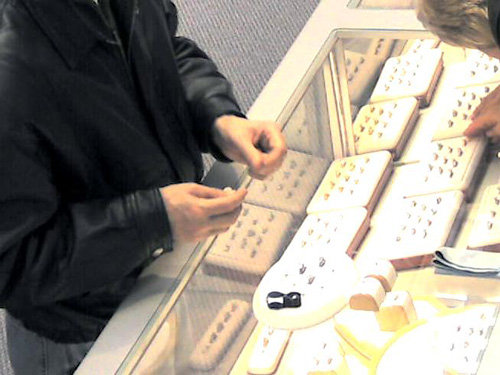 And the next frame, with the three smaller fingers in his left hand concealing the palmed ring: And the next frame.  When the clerk finally looks back up, he appeared to be still holding the original ring, and the clerk was not aware one was missing.

A low-res version of the video clip is here.  The frames above occur at 1:54 in:

Our thanks to both IQeye and Access Security Corp for this successful exacqVision NVR installation.  They can be reached as follows: