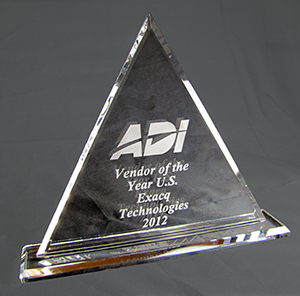 Weâ€™re pleased to announce that Exacq Technologies has received the 2012 ADI Vendor of the Year Award. The award was presented at ADIâ€™s Vendor Symposium held on January 18, 2013.

ADIâ€™s Vendor of the Year Award is presented to one vendor that excels at product advancements, sales goals and outstanding service. This is only the second year that the exacqVision product line has been available through ADI, and Exacq won the â€œ2011 Rookie Vendor of the Yearâ€ award during this same meeting last year.

Weâ€™re certainly honored and grateful to accept this award. ADI has quickly become an excellent partner and we look forward to another successful year with them.

ISC West 2012 just wrapped up in Las Vegas. It was a busy and successful show for us. Our new, larger booth enjoyed extremely heavy traffic throughout the three-day show; our products were on display in a number of third-party integration partner booths, and we previewed new products, including:

Our new exacqVision Edge product, a complete Enterprise VMS server running on an IP camera, was featured. Initially supporting Axis IP cameras with ARTPEC 3 & 4 processors, exacqVision Edge loads directly onto the IP camera. Edge provides complete exacqVision Enterprise functionality without the need for an external server. Edge cameras appear in the camera tree just like cameras from any other server, and can be mixed and matched with existing exacqVision servers. Ideal for add-on cameras to existing systems where additional servers are too costly or not practical, for wireless outdoor cameras where consistent network connectivity is an issue, for short-term or covert deployment where there is no network connectivity, and for installations requiring distributed storage for high reliability. Ease of deployment for integrators: install and configure exacqVision Edge at the shop, then simply ship the cameras to the site for mounting and POE connection to network. We certainly appreciate all of our integrators, distributors and end users who came by the booth. Weâ€™ll be back next year for ISC West 2013. Some pictures from the show are below. You can also view more pictures here.